NPL’s photographers have recently captured images of a series of new discoveries. For instance, there are species new to science, newly observed behaviour, and the first images of a mysterious big cat. Explore our New discoveries Gallery or read on to find out more…

In the rainforests of Sarawak, Chien Lee photographed a new species of blue-legged tarantula Birupes simoroxigorum. Danniella Sherwood and Ray Gabriel of the Oxford University Museum of Natural History described the spider, which is the first spider in a new genus. As a result, they published an article in the February 2019 Journal of the British Tarantula Society. As Chien comments: “What better testament could there be to the countless and often wondrous new species that still remain undiscovered in the tropical regions of the world.” 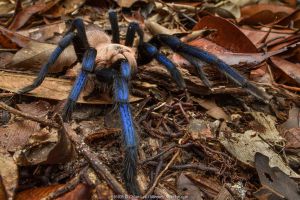 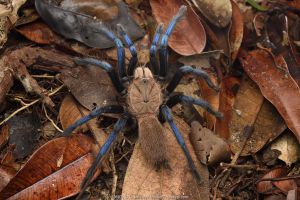 Nature Picture Library’s Clay Bolt has taken the first image of a living Wallace’s Giant Bee (Megachile pluto), the world’s largest bee, with its nest. This species nests in tree termite mounds. A lone female was discovered in January, 2019 in the North Moluccas, Indonesia. Interestingly, the species had been lost since 1981 and some feared it was extinct. The female of this species (shown here) is four times larger than a Euro­pean honey bee and as long as a thumb. She uses her large mandibles to collect resin from trees and transport it to line her nest, in order to protect it from termites and moisture. Discovered in 1858 by Alfred Russel Wallace, the world’s largest bee had eluded researchers for years – until now! 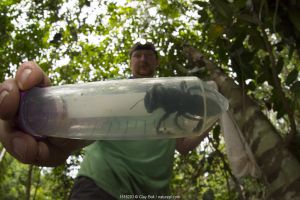 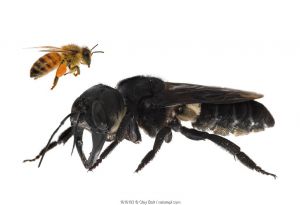 A team of biologists from the University of Michigan has documented some surprising interactions in the Amazon rainforest. The photos are part of a new journal article, published last month in Amphibian & Reptile Conservation.  Intriguingly, it documents large spiders preying on frogs, lizards, snakes, and even an opossum.

The researchers also report on commensal relationships between spiders and frogs. Commensalism is a relationship between two species in which one benefits and the other receives neither benefit nor harm. NPL photographer Emanuelle Biggi was part of the research team at the Los Amigos Biological Station in the Peruvian Amazon Basin. His images reveal an intriguing partnership between a huge tarantula and a tiny frog.  The frog receives protection from the spider, perhaps in return for eating insects such as ants and parasitic flies, which would be harmful to it. 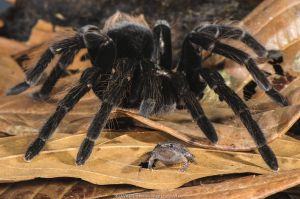 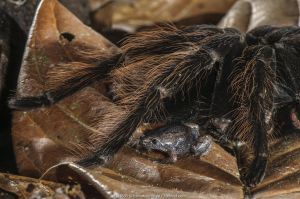 The critically endangered Tapanuli orang-utan – the rarest great ape on earth – was officially described for the first time on November 2017 in the journal Current Biology. The new species, classified as Pongo tapanuliensis, lives in the Batang Toru forests of northern Sumatra. Sadly, it has a population of just 800 individuals and its survival is now threatened by the recent decision of the Indonesian government to approve construction of a hydro-electric dam project. To find out more, see the recent article on the BBC News website.

Until now, scientists have recognised just two species: the Sumatran and Borneo orangutans. But the Tapanuli species is distinct from the other two in several key areas, including having ‘frizzier’ hair. In addition, males have smaller skulls, prominent moustaches and long booming calls that differ from the males of other orangutan species. Even the females have distinct beards. We now have a new set of images of the Tapanuli orangutan by Tim Laman, illustrating a range of interesting behaviour. 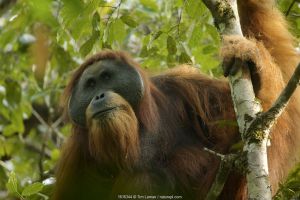 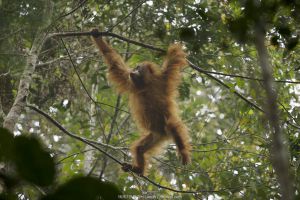 Will Burrard-Lucas recently returned from photographing a black leopard in Kenya. His images are thought to be the first scientific documentation of such a creature in Africa in nearly a century. Take a look at our Black panther blog post featuring Will’s amazing images. 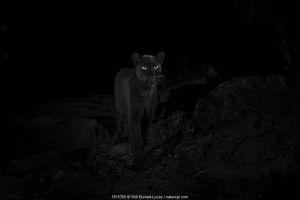 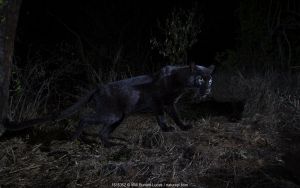 The tuna-herding sealions of the Galapagos

In 2014, local fishermen in the Galápagos Isles began reporting that they had seen sealions working together to chase and herd yellowfin tuna into shallow coves. In reponse, Galápagos photographer Tui De Roy rushed to the scene. Her photographs, the first of this ingenious hunting strategy, reveal the resourcefulness of these marine mammals like never before. Only one group of bull sealions has learned this very specialised hunting technique. Read the full feature in our story gallery section, or download the pdf here. 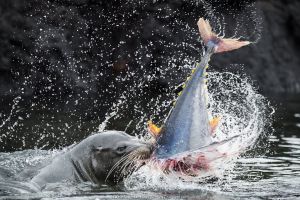 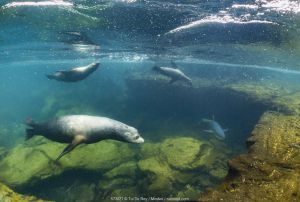 Alkali flies (Ephydra hians) are able to survive underwater in a protective air bubble in the hypersaline waters of Mono Lake in California. This is due to the dense hairs on their legs, which trap air.  NPL photographer and scientist Floris Van Breugel studied this behaviour with Michael Dickinson. Subsequently they published a paper about this intriguing discovery in the US publication Proceedings of the National Academy of Science. 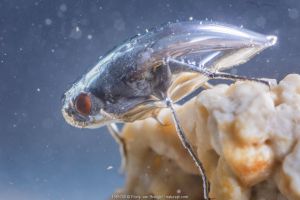 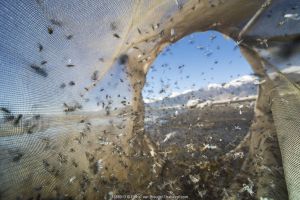 Despite having no wings, spiders are capable of travelling hundreds of miles through the air, using a technique called ballooning. In fact they do this by climbing up to an exposed point and releasing multiple threads of silk, which carry them aloft. The aerodynamic capabilities of spiders have intrigued scientists for hundreds of years. Back in 1832, Charles Darwin watched hundreds of spiders alight on the H.M.S. Beagle on a calm day out at sea, and marvelled at their ability to travel vast distances.

For many years, prevailing scientific opinion was that air currents alone were sufficient to transport these intrepid arachnids on their flights. Amazingly, they can sometimes be carried four kilometres above the Earth’s surface. However, this feat would be difficult to accomplish by the use of air currents alone. What’s more, spiders have been observed ballooning when winds are barely strong enough to carry them more than a few feet. So how do spiders and their silk balloons float through the air when there’s no wind? The answer is electrifying – literally. 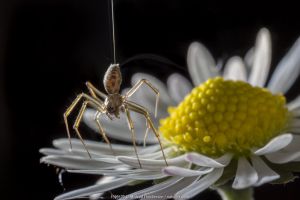 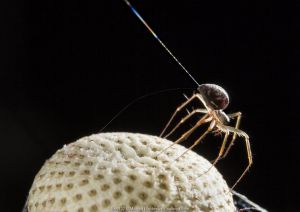 Research at University of Bristol

Researchers at the University of Bristol have discovered that spiders can become airborne using atmospheric electricity. The atmospheric potential gradient (APG) is a giant electrical circuit between the Earth and the upper reaches of the atmosphere. This is powered by the many lightning strikes occurring daily around the globe. Erica Morley and Daniel Robert, authors of the study, exposed spiders to artificial electric fields equivalent to those found in the atmosphere. Under laboratory conditions, in the absence of any wind, the spiders flew. When the electric field was switched off, the tiny arachnids would glide down again. NPL photographer Michael Hutchinson captured unique images of this behaviour, working with the research team.

Finally, Morley and Robert’s research does not definitively establish whether electric fields are required to allow spider ballooning. However, it does show that electrostatic forces are sufficient to propel spiders into the air. Their findings were published in July 2018 in the journal Current Biology. 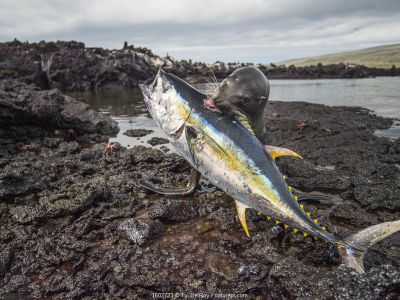 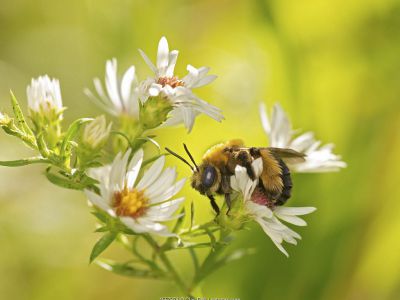 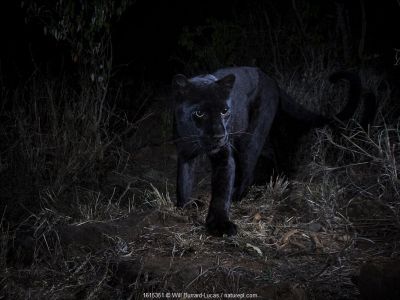