Eyecatchers are show-stopping and surprising standalone images from the natural world, accompanied by the photographers’ stories from behind the lens. Below is a sample from our latest selection. The full series can be viewed here. 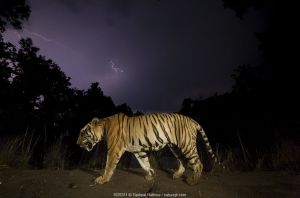 “In the dense forests of Kanha National Park, India, finding an area where tigers can be photographed against open sky is not easy. I chose to place my camera trap on the mud embankment of a waterhole, and set it up for a long exposure to capture the ambience of the night, when tigers are patrolling their territory. This image shows the dominant male of the area on a stormy night. The rainy season was approaching and monsoon clouds were building-up in the sky. By pure luck, the tiger tripped the camera at the same moment that lightning cracked the sky.” 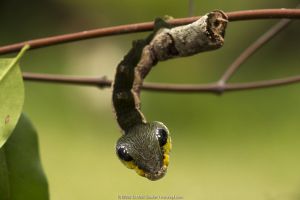 Impersonating intimidating or dangerous animals is one of the many tricks that prey species use to survive. One of the most remarkable examples of this is the caterpillar of the sphinx hawk moth, which can make itself look like a viper. When disturbed, it puffs up its head with fluid, and thrashes it back and forth, mimicking the strike behaviour of a snake. The disguise, complete with eyespots, is so effective that it doesn’t just fool birds, monkeys and other predators. It also frightens some humans who encounter it in the forests of Central and South America. 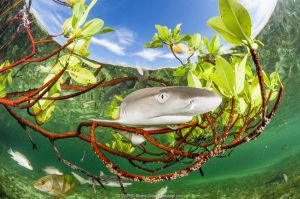 “On the tiny island of Eleuthera in the Bahamas, lemon shark pups take refuge in a small creek. The clear, flowing water is lined with mangrove trees, keeping the pups hidden from larger sharks. Lemon sharks are the first shark species proven to return to their birthplace in order to breed and give rise to the next generation (a strategy called natal philopatry, which is also observed in salmon and sea turtles).

Over the last 7 years I have spent hundreds of hours camping out on a beach at the edge of the creek. The area isn’t without its challenges. You can only shoot at high tide and you are constantly battling the sun and the insects. It can take several hours or, sometimes days, for the sharks to be comfortable enough with you before they come close to your camera, so I was delighted when this pup approached me through the mangrove leaves.” 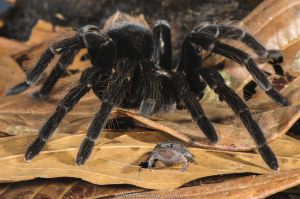 “Life is not always easy for a frog living in the rainforests of South America. There are predators everywhere – snakes and spiders and even other amphibians – which hunt their prey under the cover of night. But there is one frog that has developed a peculiar relationship with a predator: the dotted humming frog (Chiasmocleis ventrimaculata), which lives, often in good numbers, near or inside the burrows of tarantulas. The spiders tolerate the frogs and never attack them, but they do hunt and consume other amphibians passing outside of their burrows. So what’s going on?

This curious relationship is thought to be a case of mutualism, where two species interact and each benefits from the other. For the frogs, living in close proximity to a neighbourly tarantula has an obvious advantage: the spiders are like personal bodyguards, seeing off snakes and other intruders that might approach the burrow. But what do the tarantulas gain in return for this protection? Scientists have theorised that the frogs, which forage on insects, help to keep the burrow free of parasites (such as fly larvae) as well as dispatching ants that would eat the spider’s eggs. This, it seems, is reward enough to stop the tarantulas from turning their amphibian cohabitants into an easy meal.” 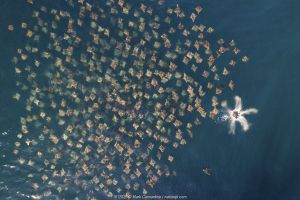 Flight of the Ray by Mark Carwardine

“Munk’s pygmy devil rays are a filter-feeding species of fish closely related to sharks. They measure about a metre across, which makes them the smallest species of all the devil rays, but when they congregate in massive schools – like this one in Baja California, Mexico – they more than make up for that! A gathering like this is not a common sight, and scientists still don’t know why the rays come together in such thousands. It could be for mating purposes, or it could be driven by the ecology of their prey. Even more perplexing are the leaps and somersaults they make out of the water (giving them the local nickname ‘Flying Tortillas’).

One theory is that these aerial acrobatics help dislodge parasites, but it could also be a form of communication. By slapping the surface of the water, the rays create a distinct acoustic pulse, which could be a signal for other rays to join the party. As more and more rays join the swirling mass, they all swim together in the same direction to create a vortex. You can see the whirlpool they create from the boat, but the sheer magnitude of the shoal can only be seen from the air. This drone image – complete with a leaping ray – tells a whole other story to the one I witnessed at sea level.” 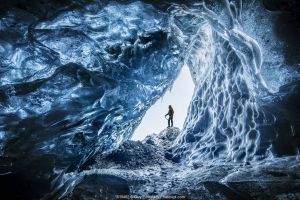 “Iceland has many unique and spectacular landscapes, but nothing quite compares to entering an ice cave beneath the Vatnajokull Glacier. This can only be done during the winter months when it is safe to enter the caves, and I always do so with an experienced local guide. Inside the ice caves you will find a magical world with beautiful natural patterns and fascinating lighting effects. From a photographer’s point of view, one of the main difficulties is showing the scale of the ice caves. Without a recognisable feature there is nothing to show how large, or how small, they actually are. For this reason, once I found a composition I liked, I asked my guide to stand within the scene to provide both a focal point and a sense of scale.”

For more Eyecatchers collections, we invite you to vsit our galleries here 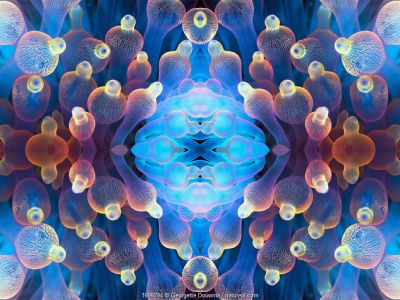 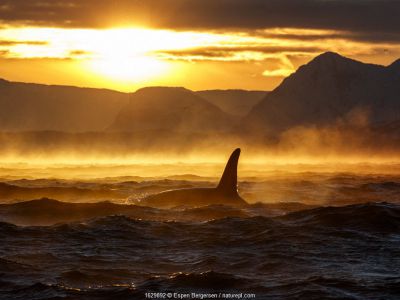 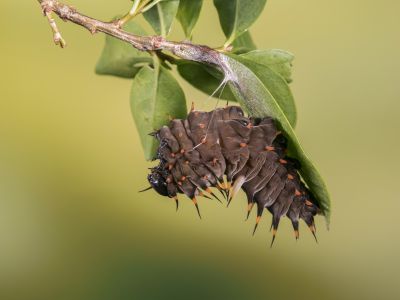